This page was inspired by historian Sandy Lydon's "hooey history" section on his website.  We have greatly expanded the list, with the hope of setting the record straight about Santa Cruz County history.  For the purpose of this webpage, myths are statements that have little or no basis in fact  Misconceptions have an element of truth, but the facts are mixed up. Admittedly, distinguishing these two is somewhat subjective.  A misnomer is something with a wrong or inaccurate name. If you would like to suggest a correction or addition to this list, please email us via the contact page.

Alfred Hitchcock's movie, The Birds, was inspired by the invasion of Sooty Shearwaters at Capitola in the early 1960s.  Misconception


While Hitchcock knew about this event, the movie was based on a novelette titled The Birds, written by British author Daphne du Maurier and published in 1952.  The original story takes place in Cornwall.  Hitchcock had bought the rights to the story and was about to hire a screenwriter when the incident at Capitola happened in August of 1961.  Hitchcock read news stories of the event, and the incident got a passing mention in the movie.

Sooty Shearwaters are seabirds that circle the Pacific annually on their long migration.  Each Fall thousands arrive off the coast of California to feed on small fish and squid.  The flock of Sooty Shearwaters were, of course, not actually attacking the town. They flew off course and accidentally crashed into the buildings.  They may have been disoriented after consuming a toxin produced by plankton. (See "Seabird Invasion Hits Coastal Homes: Thousands of Birds Floundering in Streets," by Wally Trabing, Santa Cruz Sentinel, August 18, 1961)

The wharf built by David Gharky in the 1850s later became the Railroad Wharf.  Myth

This myth apparently began in the 1940s and has been repeated in numerous publications.  In reality, the Gharky Wharf, built at the end of Main Street in Santa Cruz in 1857, became the Powdermill Wharf.  It was demolished in 1882-83. The Railroad Wharf was newly built in 1875 by the Pacific Bridge Company for the Santa Cruz & Felton Railroad.  This is documented in detail by the following essay.

Capitola was named to encourage the state to move the capital there from Sacramento.  Myth

This theory was popular in the 1970s, but is incorrect.  Capitola was more likely named by a local school teacher, Lulu Hall Green Wolbach, who was the daughter of S. A. Hall, founder of Capitola.  It was named for Capitola Le Noir (aka Capitola Black), heroine of the 1859 novel, The Hidden Hand, by E. D. E. N. Southworth. "Camp Capitola" opened in 1874. (Source: Capitola, by Carolyn Swift, Arcadia Publishing, 2013, p. 13-14)

The water underneath Santa Cruz comes from the Sierra.  Myth

According to geologists, this is simply not true.  Santa Cruz County's aquifers are recharged by local precipitation. This myth has been around since at least the 1970s.  (Source: Professor Gary Griggs, UCSC)

Although there were plans back in the late 1980s to do this, instead the old jail was converted into offices and stores and an entirely new building was constructed for the Museum.  The Museum is located on the site of the jail parking lot.  However, both the museum and former jail building comprise the "McPherson Center."

The lens used in the original Santa Cruz Lighthouse was made in France during the reign of Napoleon.  Myth

This story appears to have started with an interview with lighthouse keeper Arthur Anderson in 1941 (See Sentinel, January 1, 1941, p. 8).  While it is true that the lens (called a Fresnel lens) was made in France, Augustine Fresnel did not perfect his design until 1822, long after Napoleon was dead.  The U.S. Lighthouse Service did not start importing and installing French-made lenses until the 1850s.  The Santa Cruz Lighthouse was built in 1869, and the original lens was likely made shortly before that. (Source: Lighthouse Point: Illuminating Santa Cruz History by Frank Perry, Otter B Books, 2002)

The flume, which operated from 1875 to 1885 between Boulder Creek and Felton, carried wood that had been processed in some way—mostly cut into lumber, but also made into telegraph poles.  It did not carry logs.  Indeed, most flumes transported lumber, not logs. An exception is the "Logger's Revenge" ride at the Boardwalk, and it carries fake logs.  (Source: The San Lorenzo Valley Flume by Lisa Robinson, San Lorenzo Valley Museum, 2010)

Portland cement is made from limestone, silica, alumina, and iron that are ground up, fired together in a kiln, and then ground into a very fine powder.  When cement is mixed with aggregate (such as gravel or crushed rock) it is called concrete.  Technically, the "Cement Ship" is made of concrete, and the term "Concrete Ship" seems to be gaining in use. To reduce the weight, crushed brick was used as the aggregate. (Source: Forever Facing South by David Heron, Otter B Books, 1991)

The mission adobe on School Street was used to house mission guards.  Myth

According to the staff at Santa Cruz Mission State Historic Park, this myth just won't die.  It was repeated in print many times during the 1900s (See, for example, Historic Spots In California, Stanford Univ. Press, 1948). Some of these sources, to their credit, state that this was tradition and not based on direct evidence.  Detailed investigation into the building's history in the 1980s demonstrated that it was housing for mission Indians.  (Source: Como la sombra huye la hora: Restoration Research: Santa Cruz Mission Adobe: Santa Cruz Mission State Historic Park, by Edna Kimbro, MaryEllen Ryan, Robert H. Jackson, Randall T. Milliken, and Norman Neuerberg, 1985).

If I get one of those blue plaques, I might not be able to remodel my house.  Myth

The Historic Landmark "Blue Plaque" Awards are presented by the Santa Cruz Museum of Art & History, and there is a ceremony at the Museum each spring.  "The awards highlight historic structures, educate the public, and provide visibility for successful preservation," according to the Museum's website.  "The historic landmark designation by MAH is ​purely honorary and has no legal implications."  They should not be confused with listing in city or county historic building surveys, which have legal ramifications.

Surfer Mark Abbott, for whom the Mark Abbott Memorial Lighthouse is named, drowned in 1965 while body surfing near Pleasure Point, not Lighthouse Point.  Stories about the lighthouse often get this wrong.  Because the memorial is at Lighthouse Point and that area over looks the famous Steamer Lane surfing spot, people just assume he died there. (See Sentinel, March 1, 1965)

Charley Parkhurst was the first woman in the United States to vote.  Myth

Charley Parkhurst was a famous stagecoach driver who died in Watsonville in 1879.  When Charley died, it was discovered that, although he lived his life as a man, Charley was born a woman.  A stone monument placed at Charley's gravesite in 1955 says that Charley was, "The first woman to vote in the U.S., Nov. 3, 1868." This is not true.  Historians have pointed out that there were women who voted in the early history of the United States before there were regulations prohibiting it.

The San Lorenzo River levees in Santa Cruz were built by the U.S. Army Corps of Engineers.  Misconception

The Corps designed the levees, but they were built by Granite Construction Co. This is documented in newspaper accounts at the time of construction in 1959.

The Ocean Shore Railroad failed because of the 1906 earthquake.  Myth

The Ocean Shore Railroad was constructed along the shoreline in the early 1900s with the intent to link Santa Cruz with San Francisco.  About two thirds of the line was completed, leaving a gap between Tunitas Creek and Swanton.  The line was under construction during the quake and suffered some damage.  However, construction resumed and the northern part of the line was in service from 1908 to 1920.  By the late teens, automobiles had undermined its passenger service and trucks had taken away the majority of its freight business. In Santa Cruz County, the line was hurt by competition from the Southern Pacific.  A detailed discussion of this can be found in Granada: A Synonym for Paradise: The Ocean Shore Railroad Years, by Barbara VanderWerf, Gum Tree Lane Books, 1992.

Davis and Jordan were the first to make lime in Santa Cruz.  Misconception

One of the earliest appearances of this misstatement was in Harrison's History of Santa Cruz County, published in 1892.  Isaac Davis and A. P. Jordan set up their lime business here in 1853.  While they were the first to manufacture lime on a large scale, they were not the first to make lime.  Lime manufacturing in Santa Cruz dates back to the Spanish and Mexican periods.  For more information, see the book, Lime Kiln Legacies, published by the Santa Cruz Museum of Art & History, 2007.

Ohlone Day
The Native Peoples of this region, known generally as the Ohlone, were wiped out and no longer exist. Myth

Over the years it has often been written that there was just one remaining person in a particular tribe or that there were only two speakers left of a particular Indian language.  This leaves readers with the impression that California Indians no longer exist.  This is not true.  There are many descendants throughout California—including here along the Central Coast—and many of these people are working to preserve their cultural heritage.  (For more information see, A Gathering of Voices: The Native Peoples of the Central California Coast, edited by Linda Yamane, Museum of Art & History, 2002.  The above is paraphrased from page 205.)

There are many Spanish land grants in Santa Cruz County.  Misconception.

This myth began when Roxas died in 1873 and the local newspaper ran a lengthy story about the man and his great age.  It was perpetuated in Elliott's Santa Cruz County Illustrations . . . , published in 1879, and subsequent books on local history. More recently, however, careful study of Mission records has revealed that the man baptized at the Mission in 1792 as Justiniano Roxas and who was around age 40 at that time, died in 1808.  For more on the debunking, see Geoffrey Dunn's Santa Cruz is in the Heart, Volume II, pages 27-35.

The Venetian Court in Capitola was the first set of condominiums in California.  Myth?

The Venetian Court was constructed (beginning in 1924) in the Spanish Colonial Revival style.  Although part of local lore, no evidence has been found to confirm that these were the first condominiums in the state.  Source: Capitola by Carolyn Swift, 2013, p. 84 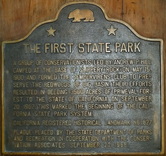 Although Big Basin is the oldest state park in California, it was not the first. The first state parks were Yosemite Valley and the Mariposa Big Tree Grove, granted to the state in a bill signed by President Lincoln in 1864. These were absorbed by Yosemite National Park in 1906.  Big Basin was acquired by the state for a park in 1902.  For more, see the California State Parks website.

While old newspapers can be a fabulous source of historical information, they can also be confounding.  Historian Phil Reader shared this example of an article on Louden Nelson from the Santa Cruz Surf, September 2, 1896 (actually his name was London Nelson, but that's another story).  For those unfamiliar with Nelson, in 1860 the former North Carolina slave bequeathed his entire estate to the Santa Cruz School District "for the purpose of promoting the interest of education."  In 1979 the community center at Center and Laurel Streets was named in his honor.  The general story in this 1896 article is correct, but Louden Nelson has somehow become Ludlow Wilson, and he is listed as buried in the Odd Fellows Cemetery instead of Evergreen Cemetery. Thankfully, most of the time the Surf was more accurate. (Click on article to enlarge.)